No Whitewashing For HOV 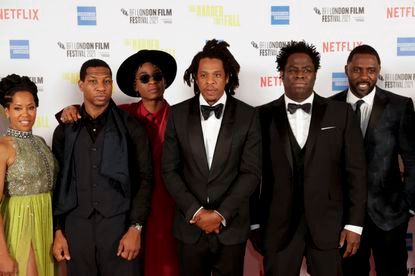 The new Jay-Z produced All Black Western, The Harder They Fall, looks to add some color back to history’s whitewashing of that time period. Historical records estimate that about 1 in every 4 cowboys were black. When being interviewed by Entertainment Tonight’s Kevin Frazier, Hov states, “(Growing up), one of the only things on public television was Westerns, every week, and we weren’t represented in those at all. In fact, our characters were taken from us. ‘The Lone Ranger’ was based on one of the characters from this film.” It is widely believed that the Lone Ranger character was inspired by Bass Reeves, who was a lawman in real life. Reeves is played by Delroy Lindo in The Harder They Fall.

The Harder They Fall stars: Idris Elba, Jonathan Majors, Regina King and LaKeith Stanfield. The movie will have a limited release on October 22 before being released on Netflix November 3rd.