So Sincere reads from The Book of David 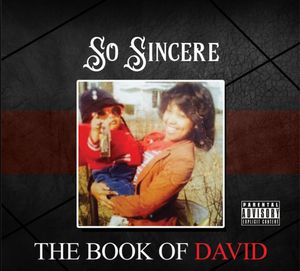 Album: The Book of David

Louisville’s own and Mighty Central High School Alumni, David Jarman, AKA, So Sincere dropped his latest effort back in September. The Book of David provides a personal look into Sincere’s life as well as life in general. In 2018 So Sincere dropped Sincerely Yours, and whether you rocked with that project or not, the Book of David is a step up. So Sincere definitely moves things in the right direction flow and production wise on this project.

It’s easy to tell So Sincere’s favorite eras of music and that just lends to the artist’s creative personality on this project. Even if the Lil Wayne sounding track, I’m Livin, is too much homage, its quickly forgivable when the 2PAC, Keep Ya Head Up sample on Unbreakable Bond comes on. For you youngsters, 2PAC samples Zapp’s “Be Alright” but you could put your money on the fact that So Sincere had PAC in mind on this one. The track is heartfelt rap song about unbreakable bonds in a relationship that could be similarly felt like its predecessor.

Dopeboy 2.0 is your typical bumping neighborhood dope boy song about a young man that could resist the call of the streets. Standout track, Testify, features another classic sample, this time from UGK and features a slew of artists including fellow Mighty Central High School Alumni, Sly Still-On and an appearance from Young Bleed (Yeah, you read that right, Young Bleed). “Vapor Max Soft Walking/Balmains, I need a coffin. Fresh to death, I drop jewels when this playa talking.” With a number features on this one So Sincere is the standout rhyme spitter but Sly Still-On’s chorus is very memorable

If you looking for a track to just showcase bars then Grind is your cup of tea. No disrespect to the featured artist, but at this point on the project you would almost wish it was just So Sincere on the song. As much as he shines on old school vibe songs like Remember Me, Sincere is much better just taking a beat and not letting anything influence his flow. The homage paid to the sounds and artist he loves is commendable and respected but one would hope he doesn’t overdo it.

So Sincere falls somewhere between 98/99 Hot Boys and a 2000s conscious rapper. This project properly mixes all of this along with up-to-date production and flows that would appear to make up who the man is today as an artist. With a title like The Book of David, who would have expected anything less. Bottom line and question of the day; is It Dope Tho? The answer is YES. The project is a 8 on the Dope Tho Scale. Listen now and thank me later... #DopeTho #YouWelcome